Over the next few months, National Records of Scotland will mark the centenary of the end of the First World War by delving into our archives for revealing documents and photographs from the closing phase of the conflict.

The Hundred Days Offensive of 1918 was the last major campaign on the Western Front – a series of deadly battles which broke the stalemate that had endured over four punishing years, finally bringing the war to a close.

Beginning on 8 August with the centenary of the first major battle of the campaign and then following the Hundred Days Offensive through to Armistice Day and beyond, we’ll share images, documents, articles and recordings that shed light on the experiences of those who lived through these fateful months, in Scotland and further afield. 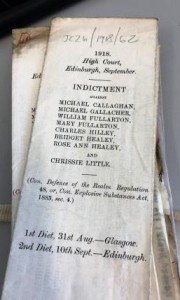 Letters, photographs, court papers and other documents from this period will tell us more about people and events from the Western Front in France and Flanders, to the Italian Alps; from northern Greece and the shores of Palestine to the plains of East Africa, and the effects of the war at home in Scotland.

Extracts from our Military Service Appeals Tribunal records will reveal more about the men who marched to war, showing where they came from and who they had been in their civilian lives, as well as the families and colleagues that they left behind. 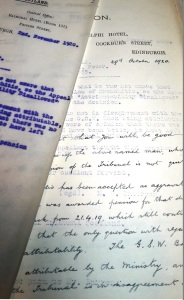 We’ll also preview records of the Pensions Appeals Tribunal in Scotland. These papers – currently closed to the public for cataloguing and conservation, with support from the Wellcome Trust – will shed light upon the wartime experiences of soldiers and the difficulties they had returning to civilian life.

And we’ll look past Armistice Day at a rapidly changing Scotland struggling to cope with the return to peacetime.

The end of the war raised hopes of peace, prosperity and the creation of “a land fit for heroes”. Women had gained the right to vote for the first time but the end of the war also brought political and industrial unrest as the government struggled to provide work and accommodation for returning soldiers… And all of this, in the midst of a virulent and deadly global flu pandemic.

Follow the Hundred Days campaign to find out more about this fascinating period in Scotland’s history, here at Open Book and on Twitter via the hashtag #NRS100Days.

5 thoughts on “The Hundred Days”