Sir Harry Lauder was the highest paid artist in variety theatre during the First World War, and the enthusiastic driving force behind ‘The Harry Lauder Million Pound Fund’. Registered as a war charity in August 1917, it aimed to ‘supplement the state or any other pension for Scottish pensioned or discharged sailors… and soldiers and the dependents of deceased Scottish sailors and soldiers who have served or directly suffered by the war.’

Throughout the war, Lauder performed for the troops at the front and on leave and encouraged men to enlist. Like so many others, he was not left untouched by the horrors of war. His only son, John, served as a Captain with the Argyll and Sutherland Highlanders. Having suffered a gas attack at the front, by late 1916 he was back in France. In the early hours of New Years’ Day 1917 Lauder received a telegram. He later recalled how ‘my heart almost stopped…I tore it open… [it read]: Captain John Lauder killed in action, December 28.’ 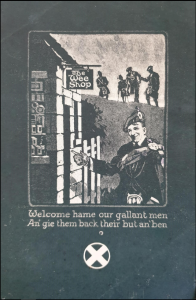 It was perhaps this loss that made him so determined to help the men who returned home yet faced hardship. For Lauder, the fund was ‘a partial payment of the debt Scotland owed for what [servicemen] had done for her.’

National Records of Scotland holds a file of the fund’s tax records from the early 1920s (ref IRS21/1404). Also included are two short booklets raising awareness of the charity. One implores that for soldiers ‘gone West, nothing can be done. Those… who come back hale and hearty need not fear the future. But for those who have suffered in the fight – those who have lost an arm or a leg – will need all the help they can get. Those men who have given up businesses…– they will need a helping hand.’

Donations were also encouraged through fundraising. Events included bring and buy sales, a concert in The McEwan Hall, Edinburgh and a flag day in North Berwick.

In late 1917 Lauder travelled thousands of miles across America and addressed sold out events to over 2 million people. Tartan decorated envelopes for donations were distributed whilst Lauder passionately gave his address: ‘Our bonnie, broken laddies must be reinstated…We must not let our dour, proud…sons starve or lose their previous places in the ranks they adorned in pre-war days. I want a’ the Scotsmen an’ a’ the Scotswomen roon the world tae help their war-crippled countrymen.’ 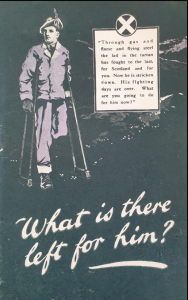 The second booklet titled ‘What is there left for him?’ gives examples of assistance offered. For instance, the passage of a 21 year old ex-serviceman had been paid to Australia in the hope that the warm climate would help him recover from effects of a gas attack, and a young miner who had lost a hand in combat and lived in temporary lodgings was granted £25 to purchase furniture and kitchen utensils.

In March 1920, the Edinburgh Evening News reported that throughout 1919, grants and loans of around £43,000 had been awarded from the Fund. However, the closure of a number of other charities put pressure on Lauder’s venture and difficulties arose. Over 2,500 applications were still to be processed and the Fund was forced to only accept applications from disabled and pensioned ex-Servicemen. It was later wound up, but for countless numbers of men returning to Scotland, it had surely been a welcome sign that help was available, and people cared.

For Lauder’s efforts, King George V awarded him a knighthood in February 1921.

Sir Harry Lauder died on 26 February 1950. According to The Scotsman he was ‘more than a comedian: he was half poet and the staunchest of patriots.’ Illustrations from various leaflets issued by the charity to raise awareness and encourage donations – National Records of Scotland Ref. IRS21/1404.

This article originally appeared in the current issue of History Scotland.