From the NRS Archives: Servicemen in Scotland’s Asylums, August 1918

Shell shock – a contemporary term used to describe the psychological trauma experienced by soldiers who fought on the battlefields of the First World War – is familiar from documentaries, movies and novels.

Shell shock may call to mind stately homes and poets recuperating in the leafy surroundings of Craiglockhart War Hospital, a former hydropathic institute requisitioned in 1916 to serve as a war hospital for officers. One set of records in the NRS archives however shows that many rank and file soldiers exhibiting signs of poor mental health were sent to a very different type of institution.

The Notices of Admissions – admissions papers from both Scotland’s royal and district asylums, which were then commonly known as “lunatic asylums” – contain the details of every patient received at a Scottish psychiatric institution during a particular month. 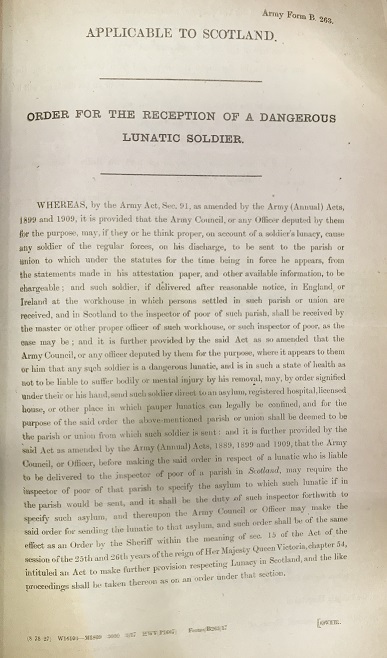 I looked at just one volume, from August 1918. Amongst the hundreds of people admitted that month were eighteen soldiers, two sailors and one RAF serviceman.

It shows that many servicemen who suffered from debilitating mental health conditions were detained in asylums under the provisions of Army Form B. 263 – “An order for the reception of a dangerous lunatic soldier”.

In the era before the establishment of the Welfare State, provision for poor people who fell ill or suffered serious injuries included charitable and voluntary dispensaries and hospitals. It could be patchy, basic and might vary markedly from one area to the next.

Most of Scotland’s lunatic asylums were established in the years following the 1857 Lunacy (Scotland) Act. They cared for patients with a variety of physical and psychiatric conditions that were generally bracketed together as varied forms of “insanity” – consisting of symptoms such as depression, anxiety and delusions, but also covered conditions such as epilepsy, alcoholism and syphilis.

Applying for poor relief carried a serious social stigma. Admission to a pauper asylum would have been seen as a last resort by patients and their families but it was the only recourse available for many impoverished people in need of medical treatment.

What do the files contain?

For each new patient, there is a note from the Asylum’s superintendent recording his or her admission.

Papers for servicemen include a copy of Army Form B. 263 as well as his name and regiment, and the superintendent’s observations on his physical and mental condition.

A separate statement gives the patient’s name, age, rank, marital status and religious persuasion, as well as details of their condition and the date of its commencement and notice of whether the patient has previously tried to harm himself.

Finally, there is a form signed by a commanding officer giving details of the serviceman’s behaviour that led to him being discharged and remitted to an asylum.

At the outset of World War One, the effects of industrial warfare upon the human psyche and the strain of coping with long periods of constant threat were poorly understood and would become very controversial. The field of psychology was still in its infancy and doctors struggled to treat soldiers who often displayed very severe symptoms.

From the evidence I found from August 1918, it’s unclear how military and civilian doctors determined whether a particular serviceman should be admitted to a War Hospital or to an asylum.

It could be that military medical officers or general practitioners decided that a serviceman’s behaviour wasn’t the result of the pressures of war but was instead a type of mental health issue commonly found in civilians.

Many of the symptoms displayed by servicemen and civilians in the August 1918 volume appear to have been superficially similar. Some resemble those that could have been attributed to shell shock under the general terms “Melancholia” and “Apathy” – including depression, trembling, confusion and extreme anxiety.

“He thinks he is Jesus Christ”, his file notes, and he “hears voices telling him he is King of England”.

It appears that servicemen’s military records were not always considered as a possible root of their conditions. There are some references to “stress of current campaign”, but little to indicate that the war itself was commonly regarded as the proximate cause. I found only one reference to a physical injury sustained on the battlefield.

Terms such as “shell-shock” and “neurasthenia” do not appear at all. The strongest reference is a suggestion that one soldier’s existing condition may have been “aggravated” by the stress of the war.

On the other hand, it’s possible that the strain of war casualties on the available services meant that the asylums provided the only available care for patients from the armed forces.

One notable trait that all of the servicemen admitted in August 1918 share in common is that none of them held a rank higher than Private or its equivalent.

Although the experience of prolonged war had disrupted the composition of the armed forces, they maintained a rigid class structure throughout. Most military officers were drawn from Britain’s upper and middle class, while working class men were mostly recruited into the infantry or as low-ranking sailors.

Servicemen’s financial position is also likely to have determined which institution they were sent to. Medical care was expensive and difficult to access for those who lacked the necessary funds. Discharged from the armed forces with only their own resources, asylums may have been their only hope of treatment.

The Notices of Admissions are a fascinating and sometimes disturbing insight into the development of the discipline of psychology and medical treatment of people with mental health conditions.

Although I’ve focused here on the experiences of servicemen, these records also contain a wealth of social history, reporting on the lives of men and women who might not otherwise have been recorded in such detail. Some entries reveal much about patients’ personal histories and family circumstances.

NRS holds the Admission Books for Mental Institutions in Scotland between 1858 and 1962. To comply with legal requirements, these volumes are each closed for one hundred years.

The Notices of Admissions are part of the NRS Government Records, many of which can be accessed via the Search Rooms at General Register House.

You can find guidance on accessing these and other records here.

One thought on “From the NRS Archives: Servicemen in Scotland’s Asylums, August 1918”