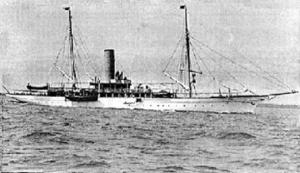 The first day of the New Year of 1919 brought tragedy to the Island of Lewis, when the naval yacht ‘Iolaire’ crashed onto rocks in the approaches to the harbour of Stornoway. Of the official total of 284 naval crew and passengers on board, only 79 survived.

The loss of almost 180 Lewis men so close to home was a calamity that has remained alive in individual and collective memory on the island throughout the ensuing century. At the close of the war it ‘heaped sorrow upon sorrow’ by adding to the comparatively high proportion of deaths of servicemen from Lewis, which at about 17% was amongst the highest in Britain.
As fighting on the Western Front ceased on 11 November 1918, the people of Lewis shared the general relief felt throughout Britain. While men serving in the British Army were mostly unable to return home at the end of the year, many islanders who had been serving in the Royal Naval Reserve headed home on leave.
The tragedy of the deaths of over 200 men after they had endured the trials of wartime service, was made worse by the disaster happening so close to home for most of the victims; by inadequate provision of life-saving equipment on board, and the slow deployment of life-saving apparatus on the shore; by incompetent navigation and by the absence of command when the boat hit the rocks.
The heroism of the man who carried a line ashore to form a literal lifeline for others to reach safety, and the courage and resilience of the survivors, was of limited comfort to the bereaved.The disaster is documented in NRS records through the individual stories of men who perished in or survived the disaster.
The outline of their lives can be traced in the statutory registers of births, deaths and marriages, as well as the censuses. Some men can be found in the testaments. A less well-known series contains the appeals against conscription that many islanders made in 1916. They include some made by men who later died in the ‘Iolaire’ disaster, and reveal aspects of island life. All of them are available online through ScotlandsPeople.
Another aspect of the disaster that is documented in NRS records is the administrative burden it placed on the Registrar and his assistant in Stornoway. They were faced with having to register the deaths of more than 200 people in a single incident, compared to 230 deaths in the whole of 1918. The Registrar General in Edinburgh advised on appropriate procedures in the difficult circumstances, and supplied more forms on which to register the deaths.
The Registrar had to await official proceedings to complete firm information on the victims, some of whose bodies took months to recover, or were never found. This meant that the last of the ‘Iolaire’ victims’ deaths was not registered until 29 December 1919, almost one year after the disaster.
Read more about the ‘Iolaire’ disaster in the latest addition to our First World War features.