Conserving the Evidence of a Revolution

NRS archivist Simon Johnson and conservator Jackie Thorburn recently collaborated on a six-month project to improve public access to the trial papers of the Scottish ‘Radical Rising’ of 1820. This facilitates our plans to mark the 200th anniversary of the Rising in September 2020.

In the first of two articles for Open Book, Simon and Jackie introduce the project and specifically describe the process of conserving an often overlooked collection of great national significance.

‘Oyer and terminer’ – ‘to hear and determine’

On 29 May 1820—200 years ago today—a special commission of “oyer and terminer” was granted under the Great Seal of England. This conferred royal authority to hear and determine treason trials in several counties of Scotland for those individuals charged with involvement in the so-called ‘Radical Rising’ of April 1820.

The Rising was a revolutionary insurrection which largely appears to have fallen by the wayside in terms of Scottish political and social history. Based in central Scotland, artisan workers—weavers, shoemakers, blacksmiths—initiated a series of strikes and social unrest during the first week of April 1820. This pushed for governmental reform in response to the economic depression. The Rising was quickly and violently quashed and the subsequent trials and their immediate aftermath ended in September 1820.

NRS holds the highly significant trial papers under catalogue reference JC21. This material shows that 88 men were charged with treason. Of those tried and found guilty, 19 were transported to Australia, where they largely found sympathy and were considered respectable settlers. The three alleged ring-leaders were executed, at Glasgow and Stirling. The executed ring-leaders, James Wilson, John Baird and Andrew Hardie, came to be seen as martyrs to the cause.

In September 2020, NRS will mark the 200th anniversary of the end of the trials and executions. To facilitate this, a collaborative project was initiated between NRS Digital Services and Conservation Services, to improve public access to the material. This was a four-part process:

This first of two articles specifically focuses on Jackie Thorburn’s efforts to conserve the JC21 material, and to render it suitable for digitisation.

The trial records of the Radicals were held among the records of the High Court of Justiciary which, for many years, were stored in squalid conditions in the Laigh Hall of Parliament House, Edinburgh. The records were subject to damage from the environmental fall out of coal fires and industry. They were transmitted to the Scottish Record Office (NRS’s predecessor) in this sorry state in 1972.

In September 2019, four battered document boxes arrived in the NRS Conservation Studio. They contained the entire collection of trial papers for the Rising: a total of 26 individually-referenced items (302 individual folios), mainly parchment, all of which had been tied in bundles. The material was very dirty, obscuring text and adding to the acid degradation of the material.

Initially, the items were surface-cleaned with brushes to remove loose dirt, then cleaned more thoroughly with erasers. Caution was required, particularly so for the parchment items. Ink or pigment never sinks into the fibres of a skin in the same way that it does when applied to paper, so care is required to ensure that nothing is dislodged. 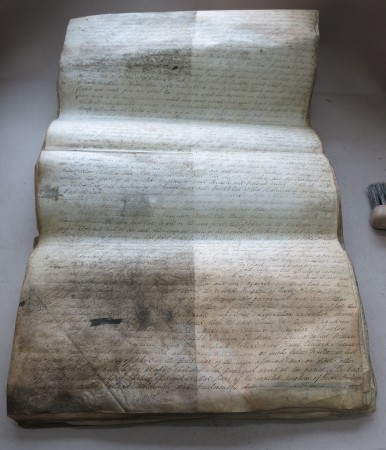 Sitting in awkward positions for too long is a common complaint of conservators. It all too often results in stiff necks and sore shoulders.

The same can be said of the JC21 material, which had been held in one position for years, folded and tied in bundles, resulting in stiffness and inflexibility. This made the bundles difficult to open and read. Parchment absorbs moisture from the air, leading it to contract and expand in relation to its environment. When it was folded, tied up and put in a box, it was constrained and thus it became ‘stuck’. 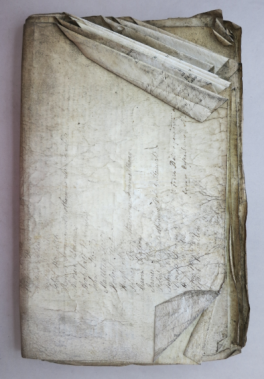 To resolve this problem for the smaller parchments, a 50:50 solution of water and alcohol was applied along the creases and folds with a small brush and the skin was held ‘open’ by hand or with small weights, applying minimal tension to the fold. The solution penetrated the fibres prior to evaporation and allowed them to be manoeuvred, whilst maintaining the integrity of the items.

For the large single-sheet parchment manuscripts, a ‘humidification chamber’ was created: essentially a ‘document sandwich’ with layers of thin-spun polyester, Gortex (which would permit water vapour penetration), and spray-wetted capillary matting.

This parcel was then enclosed under a blanket of polythene and weighted around the edges to create the chamber. The water vapour slowly did its trick, allowing the conservator to carefully control the levels of moisture and to gently manipulate the skin, easing out the folds and creases. The sheet was then allowed to dry into its new state. 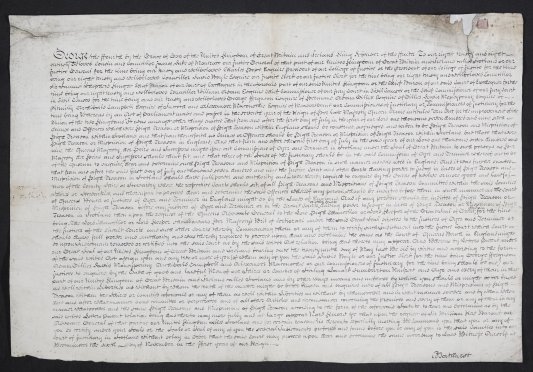 For those few parchment items which required repairs, unbuffered parchment and goldbeater’s skin (a translucent parchment made from bovine intestine) was utilised to repair the holes and losses. A 3% gelatine solution was used as an adhesive, which was applied warm with a small brush. A very fiddly process!

Parchment is much more resistant than paper to corrosive inks such as iron gall ink (the ink used for the handwritten annotations on the JC21 documents). This is why parchment was, and still is, used for many legal documents.

The printing ink used on both the paper and parchment documents is a carbon-based ink. These inks are affected by the reactivity of the skin to its environment—the skin expands and contracts—stressing the layer of ink, which cracks and eventually flakes off. Over-handling can also cause stress and lead to loss of ink.

A 1% gelatine solution was used in the worst areas to consolidate fragile areas of ink and thereby reduce the likelihood of any further loss from these areas.

Finally, the items were repackaged into new, custom-made archival boxes. The items are now all flat, but they are not held under any form of tension. The conservation work took in excess of 200 hours. Now that the entire collection is available digitally, access to the original material will be restricted.

Having completed the conservation work on the collection, on 3 March 2020 the NRS hosted visitors from two organisations with a particular interest in the Rising.

Firstly, the ‘1820 Society’, which was founded to publicise and commemorate the Rising. Secondly, the ‘Scottish Australian Heritage Council’ (SAHC). One of the visitors, Nea MacCulloch of the SAHC, is also a direct descendant of one of the transported Radicals, Thomas McCulloch. The photographs below were taken during their visit to Thomas Thomson House to view the collection and to discuss potential outreach plans, and was an enjoyable and informative visit for all involved.

The entirety of the JC21 collection has been digitised and added to the Virtual Volumes image viewer in the NRS search rooms at General Register House. The updated JC21 catalogue can be explored online at the NRS website.

Part 2 of Simon and Jackie’s overview of this project, exploring the work to digitise and re-catalogue the collection, will be published on Open Book on 23 June – 200 years to the day since the first Radicals trial commenced at Stirling.