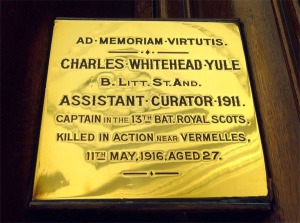 Inside General Register House at the east end of Princes Street in Edinburgh, there is a small plaque which commemorates Charles Whitehead Yule, an assistant curator in the historical department who was killed in action during the First World War.

While researching an article about Charles Yule, Dr Tristram Clarke – Head of Outreach here at National Records of Scotland – began to wonder whether Yule could have been the only person working at the Register Houses to have fought and died in the war.

Surely there must have been others?

Dr Clarke has been researching the war service of our predecessors for some time and earlier this week, he gave a talk at New Register House in which he revealed his findings.

He has now identified seven men who served in the armed forces and died during the First World War, and he has created the Register House Roll of Honour 1914-1918 to commemorate their sacrifice.

Dr Clarke believes there are more former staff members whom he has not yet identified who lost their lives in this conflict, men whose names should now be added to our list.

If you are aware of a family member who worked at General Register House or New Register House, and who was fell during the First World War, NRS would love to hear their story and we would be glad to consider their names for inclusion.

We would also be very interested and grateful to hear about men and women who worked for the General Registry Office, Sasine Office, on Scotland’s Censuses and other functions based at the Register Houses, and who served in the First World War or in other conflicts.

If you can tell us more about any of the men we have already identified, or if you have new names to add, please contact us by email.

We will remember them

Born in Brighton, Sussex, Ernest Downing entered the Civil Service and worked for a period on the 1911 Census before being posted to another Scottish department.

Downing enlisted in the Royal Scots and was later transferred to 5th Battalion, Cameronians (Scottish Rifles). He was killed in action while serving on the Somme on 30 October 1916.

Samuel Gregory was raised in Barrow-in-Furness, Lancashire. We know that he began his career in the Post Office and transferred to Register House in 1910. He married in 1911 and had two children with his wife, Mary Warner.

Gregory enlisted and was promoted to Sergeant in ‘C’ Battery, 155th Brigade, Royal Field Artillery. He was killed in action on 12 July 1918 near Arras before the final Allied advances which would win the war.

A territorial soldier in peacetime, Eoin McKinnon rose to the rank of sergeant in the 1/9th (Highlanders) Battalion, Royal Scots, known as the ‘Dandy Ninth’.

On 25 April 1915 he was severely wounded at Langemarck, Flanders. He was invalided home, paralysed by a bullet in his back. He died while convalescing at home in Blackhall, Edinburgh, on 14 September 1916.

The son of a shepherd, John Shaw joined one of the Register House departments before the First World War.

He went on to serve in the Royal Garrison Artillery but suffered from ill health. After the onset of tuberculosis was diagnosed in 1917, he was discharged as unfit for military service. He died in hospital in Oban, Argyll on 23 January 1918.

Walter Urquhart left school aged fourteen and on 24 July 1911 he joined the census staff as a messenger boy. In October 1913 he left to become a packer at Jenners, Edinburgh’s well-known department store.

A pre-war Territorial in 1/5th Royal Scots, Urquhart went with his battalion to the Dardanelles. He was killed on 28 June 1915 aged eighteen and like many British casualties at Gallipoli, he has no known grave. His former colleagues pasted his photograph into a staff record. His parents Walter Urquhart and Eliza Jane Bonar, later emigrated to Canada.

Walter Urquhart previously featured in an article on NRS records and the Gallipoli campaign.

James Wells was apprenticed in law and studied law at Glasgow University between 1909-12. He joined the staff of Sasine Office in 1912 and later enlisted and served in the Lothian and Borders Horse.

In April 1916, Wells was commissioned as 2nd Lt, and in August and September 1916 was wounded while serving in 1st Battalion, Black Watch. He was transferred to the Royal Flying Corps and was attached to No. 11 Squadron. Wells was killed in a flying accident while based at Scampton Airfield for training on 17 November 1917. 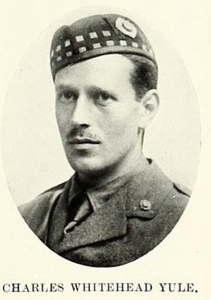 Charles Yule joined the staff at General Register House in 1911. He enlisted in 1914 and was granted a commission in 13th Battalion, Royal Scots.

After fighting at the Battle of Loos, Yule was promoted to temporary Captain. On 11 May 1916, while the battalion was in the line at Vermelles, north of Loos and opposite the Hohenzollern Redoubt, Yule was one of five officers killed when a shell landed on battalion HQ.

You can find out more about Charles Yule here at the NRS website.