As well as locating and surveying historical papers held in private hands, the National Register of Archives for Scotland (NRAS) is often in the position of trying to find a good home for archives. And sometimes this is not at all straightforward.

Take for instance a photograph album bound in soft leather found in a Travel Lodge in Edinburgh and handed in to the National Records of Scotland. Nothing with it to identify the owner, nor the subjects of the snapshots, it is not even clear that the family was Scottish. Its pages record a family at leisure, on high days and holidays.

A group of Girl Guides from the 1920s mystery photo album. National Records of Scotland, GD1/1497 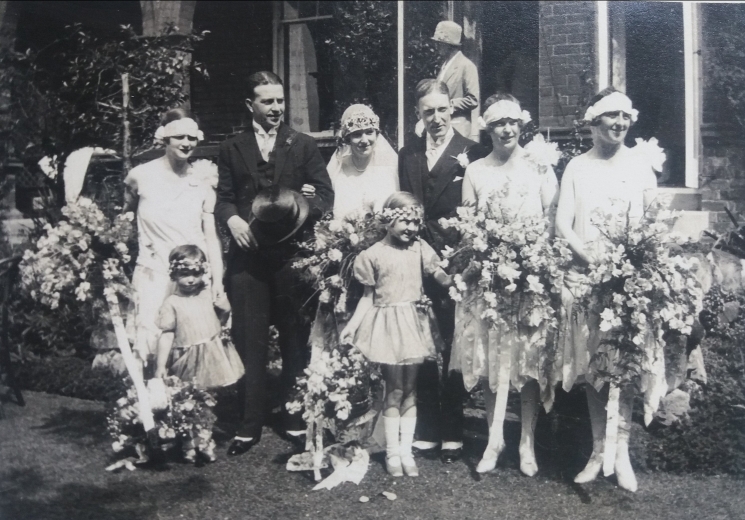 A photograph from a mystery album handed in to National Records of Scotland showing a wedding party.

But who exactly are they, this family of many generations, the smiling brides and grooms, the young girl posing with her friends on the lawn of their boarding school (which looks Scottish baronial, but where?), the nurse laughing in the snow, the grandparents posing in front of their Model T Ford and teeing off on the golf course at Gullane?

Clearly the family was of some substance. The clothes are fashionable, if providing proof positive that the dropped waist dresses of the 1920s only flattered the tall and thin! Hair is bobbed, cloche hats abound, fox furs drape shoulders, hems rise for the younger generation while their older relatives hold on to a longer, more modest look, redolent of an earlier era. There are smart weddings, the bride and bridesmaids in flapper headbands and handkerchief hems.

The snaps record family holidays: to the Lake District, where they stay at the fashionable Ullswater Hotel built in the 1830s to serve the growing tourist trade (now the Inn on the Lake Hotel), and visit Mardale Green, a village which disappeared in 1935 when the valley was flooded to make the Haweswater reservoir; trips to York, to Tintern Abbey and Wells Cathedral; to Argyllshire, staying at the Loch Awe Hotel. There are even foreign holidays, to the Riviera and the Alps, which in the 1920s were limited to the well off.

It has been possible to identify some of the places in the photographs but not where the family lived, which makes finding a suitable archive for the album tricky. All archives have their own collecting policies which set out what material they routinely acquire as well as areas of their collections they would like to build up. Without knowing the particular local connections of the family, and with nothing in the album which renders it of national importance, what should be its fate?

If you recognise any of the people in the photos, please get in touch.