On 2nd August 1847, a young man named Archibald Burke allegedly attacked and raped Elspeth Duffus, the wife of the local carter, on a quiet country road in Couper-Angus. Under normal circumstances, once any physical evidence of wrongdoing had been gathered and once the proposed list of witnesses had been finalised and their declarations duly recorded, Burke would have been tried locally in Perth and brought to justice with customary swiftness.

Archibald Burke, however, was both deaf and mute; a disability at the centre of a fiercely fought nineteenth century debate more than sufficient to throw the Scottish justiciary into complete disarray.

Indeed, Burke was not sentenced for seven long months; a period fraught with uncertainty and indecision, both in court and in the national press. Having been first heard, and then abandoned, at the Perth assizes, his case was then taken up by the High Court in Edinburgh. Not even here, after at least three separate hearings, was anyone willing to pass final judgement on Burke. Rather sensationally, in the end, his case was passed to the Secretary of State for his consideration.

At the very heart of the furore over the fate of Archibald Burke was the question of communication.

Firstly, in the most practical sense, if a deaf-mute defendant like Burke was unable to read, write or use any form of commonly understood sign language, how would they possibly be able to provide their own version of events? More worryingly, how could they be made to understand the charges brought against them or the potential punishment they were facing in order to make their plea? Indeed, in light of these deeply troubling issues around communication, was it fair and just to bring illiterate and uneducated deaf-mute defendants to trail at all?

The Advocate at the Perth Assizes clearly thought not. He described Burke as having ‘never received any education whatsoever’ and as being ‘totally incapable of communicating any information so as to enable his defence to defend him at his trial… he cannot write, and not being able to spell, any signs which he makes on his fingers are unintelligible and any other signs which he can make are so limited that it is impossible, even for parties who have known him long, to understand any of his wishes beyond those of eating and drinking…he is, in a like manner, incapable of receiving the communications necessary for his trial’ (NRS, AD14/48/473).

Writing in his Manual of Medical Jurispridence in 1844, just three years before Archibald Burke’s case made national headlines, the famous English toxicologist Dr Alfred Swaine wished to draw his reader’s attention to a further, and far more disturbing set of beliefs regarding communication, sensory impairment and insanity.  He argues: ‘It was formerly laid down in the law-books, that a person born both deaf and dumb was by presumption of law an idiot, [but] want of speech does not imply an incapacity in either understanding or memory, but only a difficulty in the means of communicating knowledge’.

However, as the precognition papers of deaf-mute defendants like Burke are peppered with questions regarding their sanity and their capacity to understand the difference between right and wrong, it seems that Dr Alfred Swaine stood alone in championing his more enlightened view of the matter.

For example, on 13th November 1847, William Hutchinson, the Governor of Perth Prison, provided the following statement upon the request of a Crown Agent in Edinburgh as part of the preparations for Archibald Burke’s forthcoming appearance before the High Court: ‘He has no appearance of insanity or idiocy about him and frequently appears anxious to communicate with us and make signs with his hands and contortions with his face, but I have never been able to make out what he would be at’ (NRS, AD14/48/473). A very similar letter found among the precognition papers for the trial of David Brook, for assault in 1852, addresses identical concerns. Here, despite claiming to have lost both his hearing and his speech to scrofula as a child, Brook is described as being ‘perfectly acute in all his other faculties’ (NRS, AD14/53/218, dated 27th November 1852).

Similarly, on 2nd March 1861, the Fiscal for Dundee wrote to the Crown Agent in Edinburgh to confirm that he had added the name of another physician to the list of witnesses in the forthcoming trial of Margaret Tulloch, a deaf-mute pick-pocket, petty thief and prostitute, in order ‘to prove the prisoner’s sanity’ (NRS, AD14/61/53).

There emerges from the records a great sense of urgency; a need to establish beyond doubt the sanity of any defendant who was unable to articulate their thoughts and feelings verbally. Without this proof of a sound mind, all preparations necessary to bring the cases of deaf-mute defendants to trial were invariably brought to a standstill.

The increasingly desperate letters from the Crown Agent working to prepare Archibald Burke’s case provide a perfect example. In a memo dated 13th September, he writes: ‘Direct the Fiscal to add to the list of witnesses some clergyman or other intelligent individual who can speak to the capabilities of the accused to distinguish right from wrong. It is time this case was completed’ (NRS, AD14/48/473). A full month later, on 14th October, when no such person was forthcoming, he writes again demanding the Fiscal continues his search for ‘some Clergyman or other intelligent person who can speak to the capacity and intelligence of the accused’ (NRS, AD14/48/473). At long last, as we have seen, he finally receives the statement from William Hutchinson in November 1847, providing the all-important confirmation of a sound mind.

Interestingly, the case of Margaret Tulloch suggests that deaf-mute defendants were not only aware of this perceived link between mental sub-normality and sensory impairment, but they were also well capable of manipulating it to their advantage.

As previously mentioned, Margaret was a pick-pocket and prostitute who worked the streets of Dundee during the 1850s and 1860s.  It seems she suffered from an undiagnosed congenital condition which severely impaired her speech. As she appeared in court a staggering 47 times and was imprisoned with relative frequency, the records we hold, alongside contemporary newspaper reports, serve to demonstrate that Margaret Tulloch had a carefully considered and well-practiced self-preservation strategy firmly in place; a persona she could adopt at will to shield herself from the full force of the law.

On 30th October 1860 Margaret was charged with theft, having allegedly stolen a purse and two sovereigns from a discarded pair of trousers belonging to one of her clients as he slept. However, despite the charges being carefully read out and explained to her, ‘it was found impossible to get any intelligible answers or statements from her or to make her understand her position and in consequence, no declaration was written’ (NRS, AD14/61/53).

This picture of Margaret, as capable of neither comprehension nor communication in any form, does not sit comfortably with the glimpses we catch of her outside the courtroom, found within witness declarations. In fact, despite her impairment, it seems Margaret Tulloch was perfectly capable of conducting detailed negotiations with her victim, a prospective customer who wished to secure her services for the whole night, including her terms, her fee and the address at which she might be found.

The Fiscal for Dundee, speaking from long experience of Margaret in a letter dated 15th Nov 1860, was certainly well-placed to shed some light on this discrepancy. He writes: ‘the prisoner has an impediment in her speech and after committing the offence put on the appearance of being silly in her mind… I recollect on the last occasion in 1856 when she was committed that the same questions about her sanity were asked’. 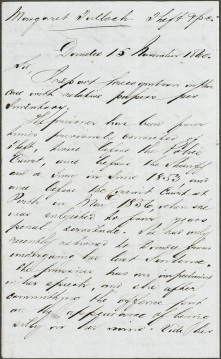 This remark suggests that throughout her criminal career, Margaret Tulloch was systematically and purposefully unresponsive in court in order to play upon the pre-conceived and apparently deeply entrenched notion that deaf-mute defendants were unable to verbally express themselves because they were mentally subnormal and therefore unsuitable for trial. From this position, Margaret was perfectly placed to successfully and repeatedly subvert one of the most pervasive and highly destructive set of ideas about disability of the nineteenth century.