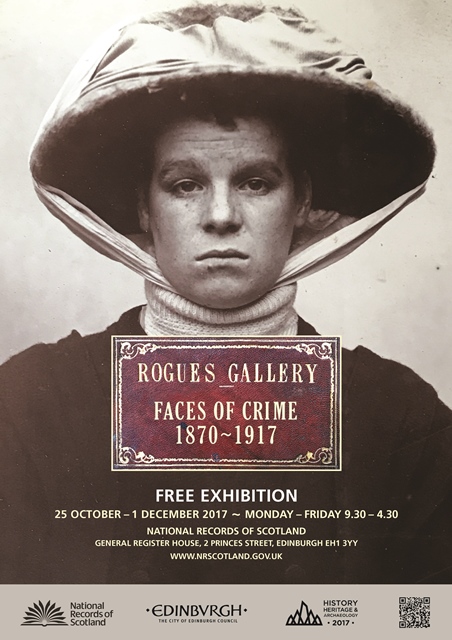 Thieves, confidence tricksters, pickpockets and more… Our new exhibition of photographs and criminal records from the Victorian and Edwardian eras will bring you face-to-face with Scotland’s criminal past.

Revealing fascinating personal details about criminals, their victims and the society that produced them, Rogues Gallery demonstrates how much we can learn about people of the past from criminal records and provides an insight into the development of policing and detection methods in Scotland.

On display for the first time: case papers from the trial of infamous poisoner Eugène Chantrelle. Purportedly the inspiration for Robert Louis Stevenson’s character Dr Jekyll, Chantrelle was tried for the murder of his wife, Elizabeth, in 1878.  A selection of the trial records will be exhibited, including a transcript of one Elizabeth’s letters, the volume of precognitions, Chantrelle’s declaration and detailed plans of their flat on George Street, Edinburgh.

The exhibition also includes a snapshot of the development of photography, as police and their forensic assistants began to realise its potential to record crime scenes and other physical evidence including the footprints that helped to convict serial housebreaker John Aitken Swanston in 1909.

To accompany the exhibition, you can also attend a series of free talks on the history of photography; how criminals used photos; how historical research informs creative writing and much more.